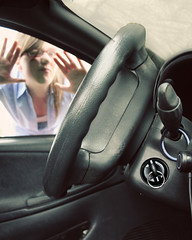 After outpatient surgery with anesthesia, older patients are better behind the wheel than younger patients, according to a new study released by the American Society of Anesthesiologists.

The study of 198 patients tested driving ability with a simulator, before and after outpatient surgery under sedation. Researchers checked for driving violations, swerving and other indicators of hindered driving ability.

Weaving and swerving were similar between the two groups, suggesting that the effects of anesthesia had worn off by the time patients were discharged.

The authors also checked how each group, younger and older, managed post-operative pain, and if that affected their driving ability. “We found the amount of pain did not play much importance in the final analysis, but the speed driven did,” said Dr. Asokumar Buvanendran, the lead investigator. “Older patients drove slower and had corresponding better weaving scores because they were able to correct deviations more quickly” he adds.

The researchers suggest that older patients could be more aware of the effects of anesthesia, so they drive more cautiously after outpatient surgery.

According to Buvanendran, as more people undergo ambulatory surgical procedures with short-acting anesthetics, patients are likely to drive before the typical 24-hour waiting period ends. That’s why they decided to perform this research.

Their study was presented at the ASA’s Anesthesiology 2011 meeting in Chicago. The findings have not yet been published in a peer reviewed journal.