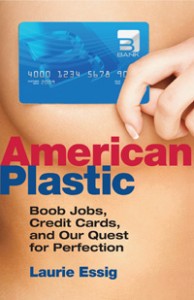 There are many ways to explain the causes behind America’s growing interest in cosmetic surgery. Theories range from broad cultural perspectives to more personal or psychological motives.  In a new book by sociologist Laurie Essig, the author offers up yet another theory behind the nip-and-tuck movement: Reganomics.

American Plastic: Boob Jobs, Credit Cards and Our Quest for Perfection is an examination of the aesthetics industry that begins with a look at the socio-economic forces of the early 80s.

The author touches on topics such as capitalism, individualism, the desire for self-improvement and consumer lending – all of which, she reportedly argues, have contributed to the rise of cosmetic surgery as people seek a solution to personal economic insecurity.

“140 potential patients she spoke with claimed they were planning to go under the knife as a response to economic insecurity. Some were afraid of losing their jobs; others felt they needed to disguise their age to secure a new position” writes journalist June Thomas of Bloomberg Business Week, who recently gave the book 2.5 stars in a review.

Along with patients, Lessig spoke to surgeons from IPRAS (International Confederation for Plastic, Reconstructive and Aesthetic Surgery) and ASAPS (American Society for Aesthetic Plastic Surgery) during the creation of her book. You can currently read several pages of it online at Amazon.com.