An abdominoplasty or tummy tuck is utilized to improve the appearance of the abdomen.  Whether it’s an extended, standard, umbilical float or mini tummy tuck, one of the most consistent parts of the surgery is repair of the abdominal muscles.  So why is this necessary?  To answer this we need to look at some anatomy. 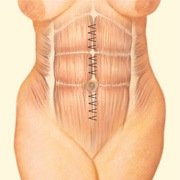 The abdominal wall, meaning the tissues deep to the skin and subcutaneous fat, is composed of two sets of four muscles. The rectus abdominis (six pack) muscles are vertical and attach between the ribs and the pubis in the center of the abdomen. The other muscles run transverse and include the external and internal obliques and the tranversus abdominus.  These muscles are surrounded by tissue called fascia (faSH(ē)ə) which connects them to each other and the surrounding tissues.

Muscles are very elastic and can stretch and contract very easily.  In contract fascia is composed of material that is similar to ligaments.  It is used to stabilize the soft tissues in the way ligaments stabilize the bones-so it is relatively inelastic.  During any event in which the abdominal cavity expands relatively slowly, for example pregnancy, the fascia stretches accordingly.  After the pregnancy the muscles return to their prespregnancy state but the fascia, being somewhat inelastic, never returns to its original state and therefore the abdominal wall has laxity.

The most common manifestation of this is rectus diastasis.  Rectus diastasis refers to separation of the rectus muscles in the midline.  The normal separation is about 1cm or less.  After pregnancy the diastasis can be several centimeters.  When this is combined with overall abdominal fascial laxity the result can be a protuberant belly.

To correct this muscle separation heavy, permanent suture is used to stitch the two edges of the rectus muscles together.  Permanent suture is used because studies have shown that diastasis can return if they are not used.  Typically the stitch is buried within the repair so it is never felt by the patient.  This repairs the abdominal wall in the vertical directions.  If there continues to be fascial laxity, corset sutures are placed on either side in the oblique direction.  These reduce the laxity in the horizontal direction.

Abdominal muscle repair during a tummy tuck allows us to restore the abdominal wall architecture and achieve a flatter more youthful abdominal appearance.