Okay I have my bottle of wine, a Valium and the encouragement from my therapist who says that talking about my mother is therapeutic.  Hmmmmm.  I’m just kidding, mixing Valium and wine-that’s just crazy.  Don’t get me wrong, this is no celebrity “I blame my mother for everything,” sob story.  My mother did the best she could with the skills she had and I think I turned out just fine (but hey we all think we’re fine).

Mom grew up the daughter of a teacher/homemaker and an industrial engineer whose specialty was time management.  My grandparents were cold Germanics who ran their lives to the second and raised children to be the same.  My mother went to Syracuse University for fine arts (it was this or Home Ec. believe it or not).  She and my dad started dating in high school and got married immediately after graduation.  Ah, life in the 50’s. 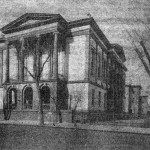 My parents “wedding” story explains a lot.  Mom and dad decided to elope.   My guess is that dad had no money, mom and grandma would have killed each other and they were born in the depression so my grandfather wouldn’t pay for something that had no return on investment.  So mom and dad were driving to the courthouse and stopped at a red light.  My mother turned to my father and said, “You never asked me to marry you!”  Dad said, “Will you marry me?”  Mom replied “Yes. Light’s green.”  Do you feel the love?

During my childhood my mother and I had a close relationship which was fostered by my participation in theater (she also did a lot of community theater).  As early as age seven or eight mom had me trying out for small parts in various community theater productions.  Now don’t misunderstand this, my mother was no “stage mother.”   She was simply finding me an activity that I enjoyed and would keep me occupied for a few hours a week, I think.  And I enjoyed performing eventually getting paid parts.  But mom has a strong narcissistic personality trait that leaves little room for anyone else.

Our relationship was very good until… can you guess?  Anyone?  Yes, I got married.  Apparently this did not fit into mom’s vision for me?  Who knows, but what I do know is that the criticisms and complaints began in earnest and haven’t ceased.  But I will give credit where credit is due.  When my ballet career (yes you’ll hear of this later) was ended in a severe accident my mother, with her infinite wisdom said, “You never finish anything.”  Ah, okay?!  Yes, she saw the end of her vicarious life but that statement has driven me in every endeavor since.

I don’t begrudge my mother; she’s a product of her upbringing.  People can change if they choose to; as I have.  My father has worked very hard to show that he cares about my family, especially my children, and all of his children.  We all have that person in our lives that we hope will change.  Never give up on them.  You never know when change may come.