A recent New York Times article titled ‘That Nose, That Chin, Those Lips‘ took a look at people who had cosmetic surgery to try and look like specific celebrities. 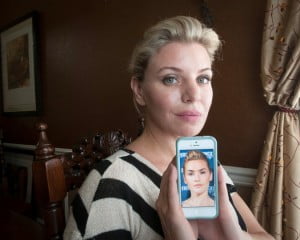 This patient wanted to look more like Kate Winslet. But doesn’t she just look like Cameron Diaz?

In a consultation, it wouldn’t be considered weird or unhealthy to bring along photos of noses or chins or breasts that you appreciate for their natural aesthetic beauty, but when you start changing your appearance to really look like the celebrity, that’s a different situation.

To borrow a quote from the NY Times piece, Dr. Steven Teitelbaum, a plastic surgeon in Santa Monica says that “we really cannot make someone ‘pass’ for someone else. At most, we can try to mimic a feature, such as a nice nose, or even to put in a grossly disproportionate chin implant to mimic the nearly cartoonish visage of Jay Leno.”

If you really want your chin to look more like Jay’s, well… technically it can be done.

Ethical plastic surgeons don’t do surgery on mentally unstable patients. Austin plastic surgeon Dr. Jennifer Walden agrees that as surgeons, “It is our duty to guide patients back to the path of what is realistic for them to expect from a surgery given their pre-existing anatomy and morphology of a particular body part such as their breasts, nose, or face.”

I think it’s important that people understand that they cannot look like someone else.  I agree in operating if the request is reasonable and appropriate for their body.  If their expectations are extreme or unattainable, then they are free to see other surgeons.