The news is currently buzzing about the topic of cosmetic surgery for men. “Why are men getting plastic surgery?” people ask. The answer will always vary. According to Dr. Hess, men are currently looking at cosmetic surgery in a different way; “not with disdain, but with acceptance,” the doctor says.

Here are seven more reasons the man in your life may be considering a visit to Hess Plastic Surgery.

“The cosmetic surgery procedure men want the most these days is lower eyelid surgery,” writes Dr. Pat McMenamin of Sacramento. The latest statistics agree. According to the American Society of Plastic Surgeons, more than 30,000 eyelid surgery procedures were done for men in 2010, showing an increase of 4 percent over 2009. The numbers suggest that plenty of men are not too thrilled about looking like “the walking dead,” as Brennan, a male surgery patient describes himself on Youtube.

Brennan chose to undergo eyelid surgery in Beverly Hills. “I’m going to get my eyes done,” he says as he walks into the office of plastic surgeon Dr. Gerald Minniti. After eyelid surgery he says his eye bags and dark circles are resolved: “it’s gone, so every time I look in the mirror that is eliminated,” he confidently explains.

2. For a Refined, Yet Masculine Nose

Since ancient times, the appearance of one’s nose has been a vital, even symbolic, part of a man’s face. The earliest nasal surgeries were most likely performed on men, including the Byzantine emperor Justinian II in the eighth century.

One scholar and surgeon writes:

Known as the Rhinometus or “the one with the amputated nose,” Justinian II was overthrown and his nose mutilated so that his disfigured appearance would prohibit him from regaining the status of emperor. These efforts were futile, as he subsequently returned to power after benefiting from nasal reconstruction.

Today, rhinoplasty remains one of the most popular cosmetic surgery procedures. “For both men and women, rhinoplasty has increased significantly in the last 2 years,” says Dr. Cuzalina of Tulsa, Oklahoma.

But the procedure isn’t identical for either gender. A man’s rhinoplasty should always preserve a masculine appearance. In men, it is generally considered inappropriate to significantly reduce nasal size or excessively refine the nasal tip.

Instead, surgeons focus on making small changes, such as reduction of the dorsal hump, narrowing of the nasal base or subtle refinement of the nasal tip. “Men typically want a hump removed or a smaller nasal tip, but we also see men who want revision surgeries from a previous rhinoplasty,” explains Cuzalina. In some cases, men also choose rhinoplasty to change ethnic features or address the signs of aging.

As physicians and other experts implement solutions for the obesity problem in America, more men are experiencing the after-effects of major weight loss. Roughly one third of the U.S. male population is obese (with BMI greater than 30). Some are turning to bariatric surgery, while others are hitting the gym with greater intensity. Unfortunately either weight loss method can leave you with folds of loose hanging skin on your body.

In this situation, a guy can turn to his cosmetic or plastic surgeon for body contouring. On the website of Dr. Jagdev Heir, Matt from Sacramento explains his post-weight loss procedure:

“After losing so much weight, I was left with a lot of excess, hanging skin on my stomach and abdominal areas. I was at a good weight, but I looked pretty bad. I thought I’d just have to learn to live with it. When I discussed it with my regular doctor, he recommended abdominoplasty surgery…”

Post-weight loss issues are showing up more in media as more celebrities undergo bariatric surgery. Rapper Paul Wall was the latest to comment on his gastric bypass. “I lost 100 pounds, so I’m back at my fight weight. I’m ready. The champ is back,” he says in an interview for Ballerstatus.com.

Although it is quite exaggerated in size, an idealized male chest is highly sought after by body-conscious men. Enhancing the chest can mean different things for different men; some want to reduce excess chest fat while others want to pump up the pectoral muscles.

In 2010, more than 18,000 American men had a breast reduction to remove excess tissue (Gynecomastia). “Many of these young men are well built and in great physical condition, but just have excess fat and glandular tissue in the chest,” observes cosmetic surgeon Dr. Jacob Haiavy of southern California.

A smaller, but still significant group of men (more than 200) chose to augment their chests with pectoral implants.

One more option exists for chest contouring, that few people know about. Some surgeons are offering a procedure called “pectoral etching,” which involves lipo-sculpting the chest tissue to create the appearance of muscle definition.

An article in PRS Journal introduced this technique a few years ago:

“Non-athletes are requesting pectoral etching to add palpable pectoral inscriptions to their chests, particularly in conjunction with upper and lower body lipectomy. It is among our most popular procedures for men because the puncture scars are virtually undetectable, there are no rejection issues associated, and the result is permanent, resulting in a physique that often remains elusive even after routine strength training.”

5. Beyond Hair Club® – More and Better Options in Hair Restoration

By the age of thirty-five two-thirds of American men will experience some degree of appreciable hair loss, and by the age of fifty approximately 85% of men have significantly thinning hair. 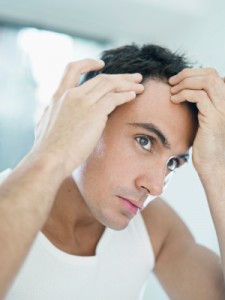 In 2010, more than 13,000 men chose a hair transplantation procedure from a plastic surgeon. New hair restoration methods are continually being developed. One of the newer techniques, follicular unit extraction, grew to rapid popularity over the last five years, probably because it is considered “less invasive.”

In a recent guest post on realself.com, Dr. Jeffrey Epstein explains that the popularity of FUE has “largely leveled off,” because the technique achieves a slightly lower rate of hair regrowth when compared to follicular unit grafting, which, Epstein says, can produce 90% hair regrowth.

Another hair restoration advancement is the introduction of bio-stimulation lasers. The iGrow system, for example, is a helmet that contains laser and LED diodes, which deliver energy to the scalp for hair restoration at home. Some plastic surgeons, including Dr. Barry DiBernardo of New Jersey, have added the iGrow to their list of non-surgical treatments.

“Men are the victims of two thirds of the 11 million jobs lost since the recession began in 2007.”

During the recession, male-dominant industries were hit disproportionately hard with layoffs. In the current economic recovery, it shouldn’t be surprising to hear that men are seeking a competitive advantage over their (often younger) peers.

“A lot of these guys think that in order to compete in the workplace – to compete with younger guys – that they need to look better,” said clinical psychologist Jeff Gardere, on a recent CBS Early Show appearance.

“In our tough economic environment, men want to look more youthful so they can compete for and retain jobs that younger people are competing for,” comments Indiana plastic surgeon David Robinson, and “plastic surgery is playing an increasingly important role for these men.”

Dr. Richard Rand of Bellevue Washington shared a similar view: “With companies downsizing their senior executive pool in the struggling economy, many have found it critical to look as young and robust as possible,” says the Seattle area doctor. “As facial rejuvenation techniques have evolved, with a very natural and un-operated look that retains masculinity, more men are having facelifts and eyelid surgery,” he further explains.

A large number of practicing cosmetic surgeons are men in the very same age group, so they understand the desire to keep up appearances. “As a boomer myself, I identify with men my age who exercise, act young, and feel young,” remarks Philadelphia plastic surgeon Bruce Genter.

7. Influential Men – Politicians and Celebrities – Are Doing It

Tabloid speculation about politicians, celebrities and other influential men “having work done” has put the spotlight on cosmetic surgery options. Even for men who don’t pay attention to Hollywood, these examples are nearly impossible to ignore.

“Media, Hollywood and advertising have all influenced men regarding what looks good and why cosmetic surgery may be an option,” says Tulsa cosmetic surgeon Angelo Cuzalina.

Last week, the Boston Herald wrote an article claiming that John Kerry looked “better than he did a decade ago.” As hard-hitting journalists should, they asked local experts for their opinions. Boston plastic surgeon Dr. Fouad Samaha observed that Kerry “looked his age in 2002, with the loss of facial volume resulting in hollow cheeks and deepening of the folds around the nose and mouth.” But now in 2011, Kerry’s appearance is visibly improved.

Dr. Samaha explains: “Although this can happen naturally, it is likely that these areas were ‘enhanced’ and that volume was added. Many techniques are available to achieve this result, and it would be difficult to say which was done here.” He also adds, “if Senator Kerry had any ‘work’ done, it was done very tastefully, enhancing his features without creating something that looks artificial.”